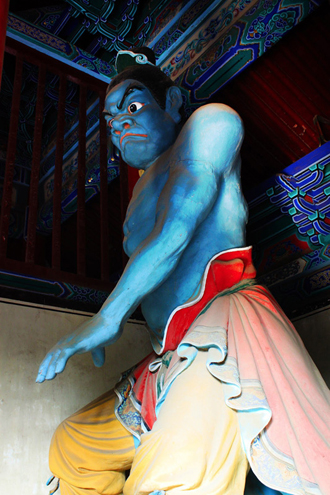 The Shaolin Monastery was originally founded in the 19th year of Taihe era of Northern Wei Dynasty (AD 495). The monastery was built on the north side of Shaoshi, the western peak of Mount Song, 13 km north west of Deng Feng County, well recessed in the mountains and forests. Shaolin Monastery is known as the cradle for Chinese Chan Buddhism as well as for its Shaolin school of martial art. It is a place of attraction to people all over the world.

In the Northern and Southern Dynasties, an Indian Buddhist monk Batuo came to China to preach Buddhism. By the order of Emperor Wei Xiao Wen, a temple was built for him in the deep forests of the Shaoshi Mountain. The Chinese character for forest is 'Lin", hence the name Shaolin. Batuo was preaching Theravada Buddhism at Shaolin Monastry and he is regarded as its first abbot. Among his many disciples, Seng Chou, a Chan Master and Hui Guang are the best known for their accomplishment in Buddhism and martial art.

In the year 527AD, the Indian monk Bodhiharma, the twenty-eighth generation disciple of Sakyamuni, arrived in Song Mountains. It was said that Bodhidharma spent nine years in contemplation, facing the wall of a cave under the Wuru Peak in the Song Mountain above the monastery. Later he came to the monastery to preach Mahayana Buddhism. Bodhidharma is credited with bringing Chan Buddhism to China. Ever since his transmission to Hui Ke the insignia of the patriarchate, Chan Buddhism prevailed in the Shaolin Monastery. Bodhidharma is regarded as the First Patriarch of Chinese Chan Buddhism; and the Shaolin Monastery, the patriarchal Hall of Chan Buddhism.

During the Sui Dynasty (581-618AD), Emperor Wen encouraged Buddhism and gave donations to the building and maintenance of the Shaolin Monastery. During his reign, he granted 100 qing ( equivalent to 667 hectares) of land to Shaolin Monastery to expand the living quarters of the monks.

During the Tang Dynasty (618-947AD), Emperor Li. Shimin granted 40 qing of land to the monastery and conferred the title of Chief General to Monk Tan Zong for his assistance in establishing the Tang Dynasty. The Emperor also gave permission to the Shaolin Monaster" to maintain a troop of 500 monk soldiers. It was in that time that Shaolin Monastery won the name of "The First Monastery under the Heaven". 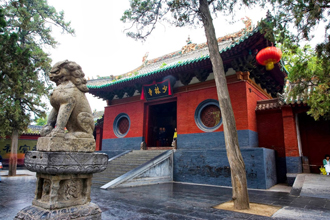 During Song Dynasty (960-1279AD), the monastery and martial arts continued to develop. At a time, the monks reached two thousand in number. The Ming Dynasty (1368-1644AD) saw the prime development of Shaolin school of martial art. Great talents emerged from thousands of monks who accomplished various feats. This period is called the "Spring and Autumn Period of Shaolin".

The present main temple gate was built in the 13th year of Emperor Yongzheng's reign (1735 AD). Kangxi. the second Qing emperor of the last dynasty (1644-1911AD) wrote the calligraphic inscription that, to this day, hangs over the main temple gate.