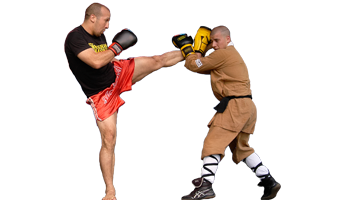 Chinese martial arts have been created and developed for survival, warfare, self-defense, health maintenance and entertainment throughout its long history. Da Lei, meaning fights on an elevated stage, can be traced back to more than one thousand years ago. Different kinds of Da Lei for different purposes can be found mostly in military and popular literature. With a great number of styles and schools, competitions among different schools and challenges from other styles were not unknown in the Chinese martial arts tradition. In the past, Da Lei served as means for exchanges of martial skills, to settle disputes or to prove one martial system's superiority over another system. Lei Tai was a platform built by the one who initiated the challenges. To accept such challenges was called Da Lei.

Da Lei in the Past

In the ancient times, the largest scale of Da Lei took place in times of war to select brave and skillful soldiers and generals to command the troops. An order from the emperor would be posted all over the country to announce the time and place for the selection by real fights.

Da Lei organized for special purposes by martial arts circles were competitions among different martial arts schools. The best disciples would be chosen to fight with opponents from other schools. This kind of Da Lei was a way to increase the reputation and prestige of the schools they represented.

On festivals, spontaneous matches among the martial arts practitioners would also take place. Participation was voluntary. These matches were usually lively and colorful because they were both entertainment programs and the participants took the opportunity to learn from each other and to meet friends. On the matches, representatives of different schools would first demonstrate a fist or weapon form of their styles and real fights employing techniques from the forms would follow. As the matches had the purpose of exchanging martial skills, they were conducted in a friendly manner. In real fights, the advantageous side would not pursue a fatal strike on the opponent in order to avoid injuries. 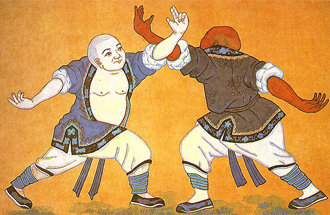 Da Lei was also means to settle disputes on the superiority of one style of martial arts in the past. The disputed sides would first agree on the place and time for the matches. Different from the previous form of Da Lei, the atmosphere of the matches was tense and hostile because both sides took the opponents as foes. The matches would usually end in damages to both sides. The Chinese martial arts tradition regarded such competition as prompted due to lack of martial virtues and many schools forbade the matches of this nature. Some schools made it a rule that the disciples who flaunted superiority and involve in competitions of this nature would be driven out from the school by the master.

Da Lei also had a romantic feature. In the past, there were women who practiced martial arts. Some were such fervent practitioners that they would set up a Lei Tai and invite man martial artists to compete on the matches. The woman would compete with the winner of all matches and marry him if he won. Other stories told that when girls from rich and prominent families were fond of famous and chivalrous martial artists, the family would invite a prestigious master to set up a Lei Tai to challenge those martial artists. As a result of the competitions, a future bridegroom for the girl would be selected and married into the girl's family.

Da Lei had no uniform written rules and the competitions often took place at random. The two sides would enter into an agreement on the spot according to the accepted rules and practice of the martial arts tradition. Sometimes, such agreement was called life and death agreement, in which the method of the matches, the criteria for winning and losing as well as arrangements to deal with the results of the matches would be agreed upon by both sides. Such agreement would have the content as follows.

The participation in Da Lei was voluntary and the participants took the sole responsibility of their life or death. Each side of the match was restricted to one person. People other than the fighters would be cleared from Lei Tai and were forbidden to assist either fighter. Concealed weapons were forbidden. Either fighter would lose if he surrendered, was incapacitated, thrown or otherwise forced from the stage. Lastly, either fighter should not exact revenge after the match.

Sanshou is the Chinese sport of full contact platform fighting. It utilises kicks, punches, grabs, throws, and trips. Originally it was designed to test all Chinese martial ait styles among each other under a standard set of unified regulations. It is rapidly gaining popularity around the world as a great alternative to Kickboxing or Muay Thai, and also as the most effective transitional sport for strikers who are making a gradual move to MMA(Mixed Martial Arts).

As previously stated, Lei Tai matches in the past were fought without rules or made spontaneously and the matches often resulted in death or serious injuries. In the Republic era (1912-1949), the Nationalist government banned the old traditions of private duels and Lei Tai contest. For a long time after the establishment of the People's Republic of China, Lei Tai contests had not been convened.

With the development of Wushu, Lei Tai contests reappeared with the name Sanda or Sanshou, translated as "Unbound Hand". In the 1970's and 1980's, great efforts from the Chinese government were made to standardize the training, the competitions and the competition rules of Sanda. The first Sanda rules were drafted in the early 1980's. Since then, many Sanda competitions of national and international level have been convened. 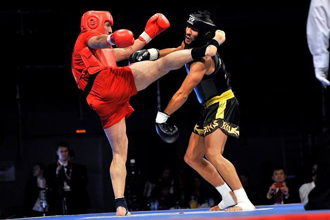 The origin of Sanda lies in Da Lei or Lei Tai fights. The Sanda rules allow for a wide array of full contact punching, kicking, takedowns and throws derived from the traditional application of Chinese martial arts and resembling to those used in old Lei Tai contests. Lei Tai as the competition platform has been adopted. However, the modern Sanda competition differs from Da Lei to a large extent that rules have been developed the use of protective equipment and gears for the competitors have been added in order to reduce the risk of serious injuries. The rules are still developing in order to comply with the needs of different types of competitions.

For a beginner, this training system is a combination of several fighting techniques I teach or different methods of combat: Japanese (karate) thai (kickboxing) and Chinese (kung fu). They can also be identified by their official name, that is to say kumite, muay thai, and sanda. Once the practitioner has knowledge and experience in competition, it shifts to be closer to the reality of street fighting. My opinion is that too many fighters who forget the essence of martial arts rather focused on self-defense. Unlike various combat sports in which rules are established, the street does not meet any of its rules or weight classification. The fact is that combat sports have rules that will limit the styles that you can use in fights. That's why it's important to diversify one's martial knowledge to maximize adaptability. That is the appropriate way to crossover skills in the street. Frequently, in my KrossFight classes, we work the same scenario within the rules of the various combat sports. For example, in the following photos we can see that when the advantage is to the person positioned behind the other different sports limit opportunities while in the street, there are no rules and no mercy! 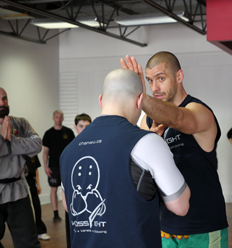