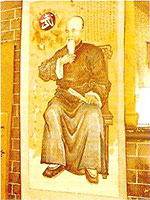 The Chinese saying, "a master of one single day is a father of a lifetime", indicates how to perceive the relationship between a master and a disciple or a teacher and a student in Chinese tradition.

In the martial art tradition, the master-disciple relationship is uniquely close. A master, or Shifu, not only teaches martial art but also morals and correct behavior to his disciple. A disciple, or Tudi, not only learns martial art from his Shifu, but also attends Shifu's daily life and does house chores for Shifu. Shifu is more like a father to the disciple and therefore their relationship is much more intimate than that between a teacher and a student.

Baishi, or bowing or prostrating oneself to a master means to become a disciple of a master. It is not as simple as it literally suggests. It is a process, which takes time and consists of several formalities.

When a master sees a student talented for martial art and morally sound, he may offer himself to be the student's master. On the other hand, when a student deems a master highly accomplished in martial art and prestigious socially, the student may want to bow to the master to become his disciple. In the latter case, the student presents a "Meng Sheng Tip" via an intermediary to the master. "Meng Sheng" literally means, "door disciple". Once a student becomes a disciple of a master, he is regarded as being "in the door". The tip is a statement of the student's intention to become the master's disciple, written on a piece of red paper, indicating his name, his will to become the disciple, and his vows that he will be conscientious and diligent and will not disgrace his master.

Once a master consents that one becomes his disciple, a Baishi ceremony will take place on a chosen auspicious day. This ceremony is to confirm and publicize the master-disciple relationship. The procedures and content of the ceremony may vary in different schools of martial art. The following is an example.

First, the master of ceremony enters the ceremonial venue. Then, the master, his wife, his other disciples and invited guests get seated. Offerings like incense, food or pastries are served to the martial alter. All people in attendance honor the gods and martial ancestors.

A banquet will follow at the conclusion of the ceremony. 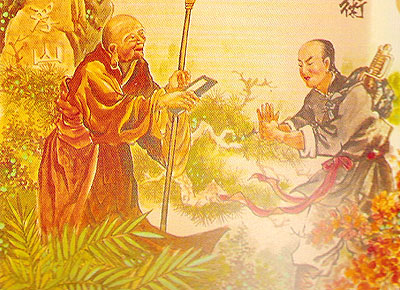