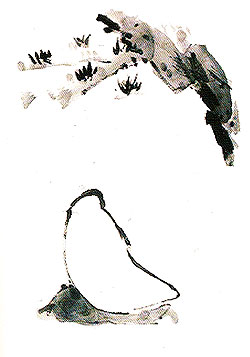 Buddhism emphasizes individual enlightenment and self-practice. The word Buddha means "the enlightened one" in Sanskrit. Buddhism advocates egalitarianism and that Buddha-nature is immanent in all beings. It claims that everyone can become Buddha through individual enlightenment. As the largest school in Buddhism, Chan Buddhism is also called "the school of mind" for its subservience to Buddhist doctrines and profound understanding of the essence of dharma.

According to legend history, when Sakyamuni Buddha gave his dharma speech on Vulture's peak, he did not open his mouth, but merely twirled a flower. No one from the over ten thousand laity and monks understood. A:that moment only Mahakasyapa smiled. Buddha looked at Mahakasyapa's smile and said, "I possess the True Dharma Eye, the Marvelous Mind of Nirvana, the True Form ofthe Formless, the Subtle Dharma Gate that does not rest on words or letters but is a special transmission outside of the scriptures This I entrust to Mahakasyapa." Thereby, Mahakasyapa became the first patriarch of Indian Chan Buddhism. The approach of Chan Buddhism is characterized by non-dependence on words, rejection of Buddhist orthodoxy and mind-to-mind transmission, which enable Chan Buddhism to emancipate itself from cultural accretions. Thus, it claims to have retained the original purport and quintessence of Buddhism.

During the reign of Emperor Wu of Liang Dynasty (502-556 A.D.), Bodhidharma, the 28th Patriarch of Indian Chan Buddhism, came over the sea from India to China. He sat meditating facing a wall for nine years in Shaolin Temple. He transmitted to Hui Ke the insignia of the patriarchate. Bodhidharma is credited with bringing Chan Buddhism to China and is regarded as the First Patriarch of Chinese Chan Buddhism.

However, the domestication of Chan Buddhism in China is attributed to the Sixth Patriarch, Master Hui Neng (638-7 BAD). He was born into a poor family and lived by cutting and selling firewood. Though illiterate, he had spontaneous and immediate insight. Once he heard one man reciting of the Diamond Sutra, his mind was opened. Later he called upon and bowed to the Fifth Patriarch and received his robe and Dharma. The prediction of Bodhidharma. that is, "when the flower has five petals, the fruits will come naturally," was later proven by Hui Neng, who did not transmit the robe and Buddha's begging bowl but only the quintessence of dharma. He transformed countless sentient beings and those who were enlightened were countless. It was in his time that Chan Buddhism flourished and reached its "golden age" in the 8,h and 9lh century.

At the end of Tang Dynasty (618-917AD), the Chan Buddhism lineage was divided into five branches and seven schools. The competition among the schools led to direct permeation of Buddhism into ideology, culture and various walks of social life. Chan Buddhism gradually replaced the "dark learning", which dominated the philosophical discourses from the Wei, Jin, Northern and Southern to Sui and Tang Dynasty; and developed itself into a school of thoughts with unique characteristics, enriching cultural life and opening an unprecedented spiritual realm to people.